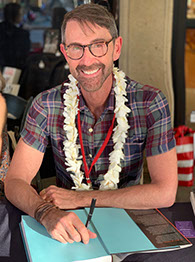 Martin Treu is an architect and urban designer who writes about architectural history and city design. He has degrees from Stanford University, the University of Virginia, and the University of Miami, with Masters degrees in both Architecture and Urban Design. Before beginning his career as an architect, he practiced as a graphic designer. His book, Signs, Street, and Storefronts, from Johns Hopkins University Press, showcases his broad design experience and passion for lettering and building design. The book was honored with an award from the Association of American Publishers. Martin has studied hundreds of towns across America for his book and has formed Eye on Main Street, an organization that aims to educate Americans on the history of Main Street and its potential for renewed vitality and integration with future development. He has spoken about signs, urban design, and architectural history at conferences for The National Trust for Historic Preservation, The Society for Commercial Archeology, and The Society for Experiential Graphic Design, among others.
http://martintreu.com IG@main_street_man