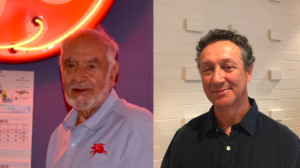 Dean and Michael Blazek are neon family. Dean Blazek began his neon career at Everbrite Signs in Milwaukee in 1952 before founding Northern Advertising in 1955. He began the Northern Wisconsin Neon Workshop in 1981 and taught over 500 students. In 1989 he published three NEON ABC bending manuals and co-authored with his son, Michael, NEON: The next generation in 1995. At 86 he continues to work at Northern Advertising, Northern Neon and DB Collectibles in Antigo, Wisconsin. Michael Blazek was a student in his father Dean’s third neon glass bending class in 1981. He worked at Claude Neon in Auckland, New Zealand and Heath Neon in Sydney, Australia before returning home and founding Western Neon in Seattle in 1984. He exhibited in a group show at MONA in 1987 and attended Ginny Ruffner’s Lampworking class at Pilchuk in 1989. In 1990, he moved to Brisbane, Australia to join partner, Duncan Read, in setting up Neon Signs Australia. 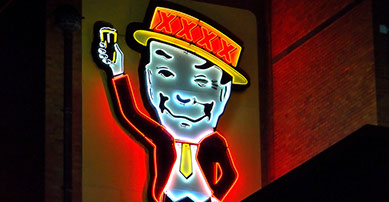